The air was thick; the joy palpable. It hung in the space and wafted through the trees at my very first Empowered Girls graduation ceremony in 2014, and the celebratory tone of this event was no different. Except where it was: the setting, the size, the meal, the songs, the fact that I could now sing along to some of them. This was my fourth graduation ceremony in this beautiful, rural community in southwest Tanzania, and it was the best yet. I’m sure the next will be even better.

480 middle school girls and boys dressed in blue skirts or shorts and white oxfords were gathered in the recently-constructed pavilion–the new home for these students’ weekly club gatherings. A place all their own. They sat at bench-desks facing the front, where their teachers, sponsors and supporters from the Mababu CCF (our cocoa farmer partner group), our small group (my dad and I, and on this trip my husband, as well) and beloved club leader and Askinosie Field Representative, Saraphiner Urio, looked upon them with pride. These students had committed to attending these clubs after school, and had put in the work. They’d learned about leadership and community enhancement. They’d learned to question cultural and gender norms. They’d practiced public-speaking and collaborative teamwork. They’d learned about personal hygiene and sexual health, and practiced drama, singing, and sports. They’d received notebooks and pens and had been facilitated in the art of “Visioning”: writing out their dreams and goals, their “prouds”, where they saw themselves in five years and how they might get there. This was a day to honor them and celebrate their accomplishments and to encourage them to keep going. But it was also a day for them to showcase what they’d learned for us. 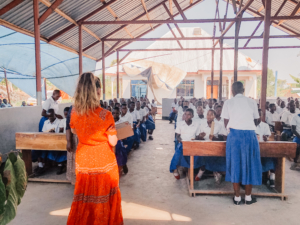 We spent the next three hours under that pavillion–the sides of which had eventually begun to fill up with the younger siblings of these students, excited to be on the sidelines of such an event–completely attuned to the boys and girls. We watched a skit written and performed by the students, depicting the story of a father who did not want his daughter to attend school. His daughter persisted with the new support of her brother, she did very well on exams and when her father tried to prevent her from going back, her brother intervened on her behalf. They both made their case to the father about why a girl’s education is important and the father eventually agreed. A true story based on how many of these students’ home-lives had changed since becoming an Empowered Girl or Enlightened Boy. We listened to several enthusiastic songs and dances, at one point jumping in among the students and joining them ourselves. We handed out awards to the top girls and boys who had shone in academics, leadership, and so on. We also handed out underwear and soap to the boys and girls, and feminine hygiene products–something we began doing 3 years ago so the girls no longer have to miss several days of school each month.

We all shared an enormous meal of goat and rice and plantains and Fanta together and when it was time to begin filing to the buffet table, the girls went first. In a culture where girls are sometimes fed only after their fathers and brothers have eaten (not unique to this part of Tanzania, or even the world, by the way-literally OR figuratively), I was encouraged by this seemingly unnoticeable gesture that indicated progress; not to mention all of the other details large and small that remind me why this kind of work is so integral to our business and making great chocolate. We each had a chance to speak to the students, to offer them words of encouragement and hope. (I was lucky to have spent several hours with these students the day before, leading a session with my husband on healthy relationships and answering questions about everything from setting boundaries to saying “no”). Mama Mpoki, our lead farmer partner who you may recognize from the front of our chocolate bars, spoke to the girls about putting their dreams ahead of everything else. She urged them to work hard and pursue their goals before worrying about dating, to be brave and courageous and take heart in being a different kind of girl.

A cool breeze signaled that it was time to go, evening was coming. Our hearts and stomachs full, our group was serenaded in a goodbye song, led out to the grove on the grounds of the new preschool we are working on, by a parade of students who will never know how much they inspire me because I will never be capable or articulating it.

When people talk about joy being contagious, I’m certain this is what they mean. I used to be a skeptic; consider me a convert. Joy is contagious and if you tend it, it manifests as gratitude (on your best days) in your actions. I dare anyone to feel unmoved by the sheer excitement, the earnest anticipation, and the quiet–and unfamiliar, to many until now–satisfaction of a goal reached in a place where I once heard a young girl say five years ago, “I don’t have dreams”. Dreams now fill that pavillion, along with fears and hopes and desires and plans, and they waft through the cocoa shambas of Mababu, over rickety bridges and down the road to Kyela-town, through the mountains into Dar es Salaam, and across the ocean to Springfield, MO where they mix with the aroma of roasted cocoa beans and remind us — our world’s future is bright.